Way back in 2006 or so, in the first Project VRM meetings, our canonical use case was ‘change of address’; that is to say, we wanted individuals to have the ability to update their address in one place and have that flow to multiple suppliers.

That seemed easy enough, so we thought at the time; all that’s needed is:

– a data store controlled by the individual

– an API that allowed organisations to connect

We did not note the need at the time, but there probably should have been one around ‘standardised data sharing terms’ so that organisations would not get tied in legal knots signing many different contracts to cover themselves as they would need to do.

So, 12 or so years later, that proved to not be quite so easy….. I think our most flawed assumption was that organisations would see this as a good thing and be willing to get involved.

No matter, the reason for my post is to flag that individual driven change of address can now be done at Internet scale, albeit yes we still need to crack the adoption issue. There are also then a number of downstream use cases, e.g. where the address change must be verified.

Here’s a visual of how change of address works in the JLINC environment; the same principles could apply in other environments. The critical dependency is that both parties (individual and organisation) have their own data-sets that they voluntarily connect to each other. 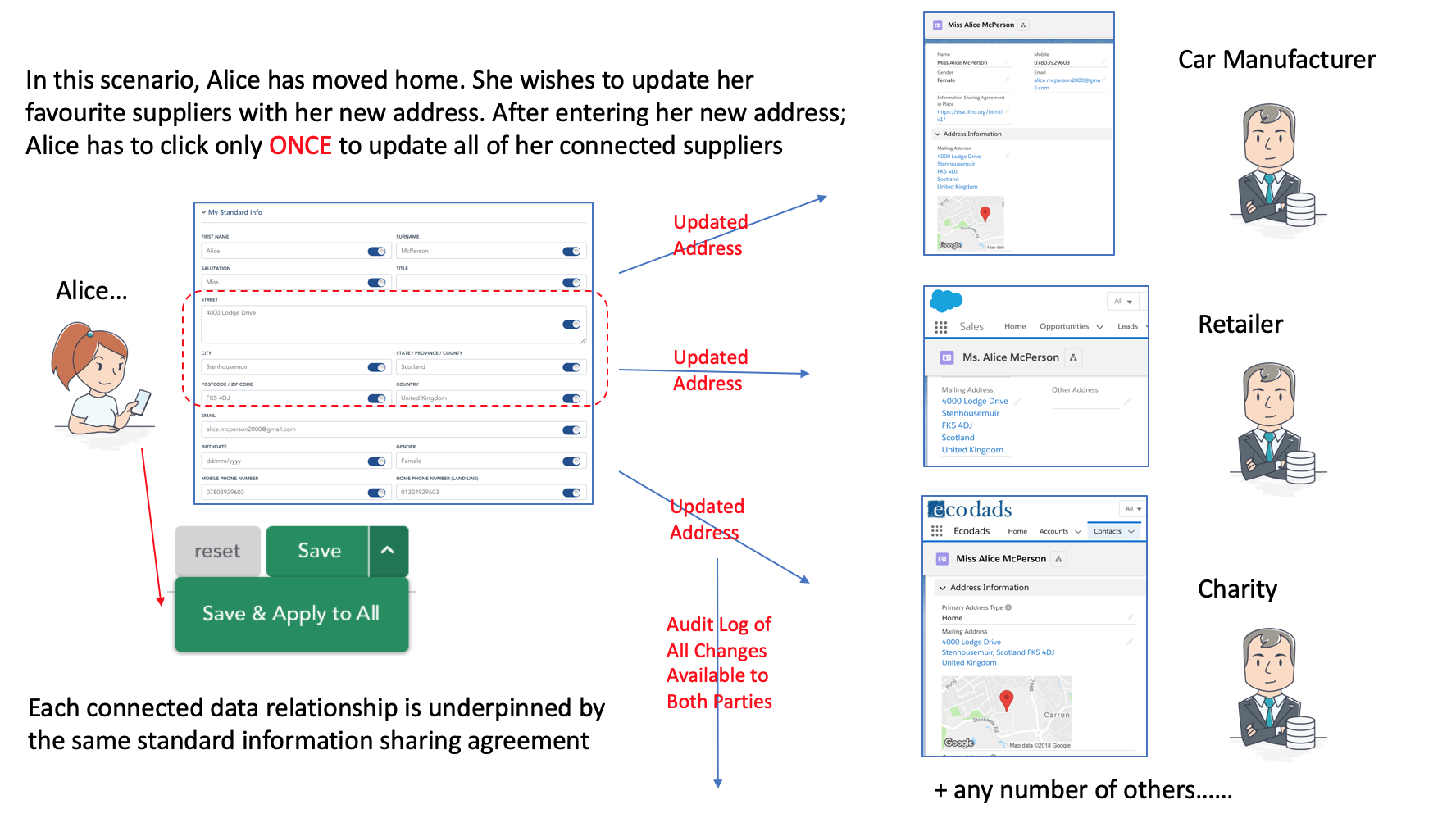 Beyond the fact that this plumbing now demonstrably works at scale, I think the most interesting thing that has emerged from the JLINC deployment is the Standard Information Sharing Agreement. The requirement here is to have an agreement that works for both parties; here is the initial one built for JLINC. The expectation is that these will evolve over time and likely become life aspect/ sector specific (e.g. Health); but critically they will not mimic the current model where each organisation invents their own. The secondary function that I believe makes this scale is the ability to record every single data exchange that takes place should either or both parties need to refer to that downstream.

So, we can now tick the box around ‘change of address’, at least as working plumbing. The better news still is that the same plumbing and approach works for any type of data, or any data flow (so organisations sending data to Alice too). At least it should not take another 12 years to make that next use case work, which incidentally was ‘Intentcasting’; i.e. an individual being able to articulate what they are in the market for without losing control over that data.