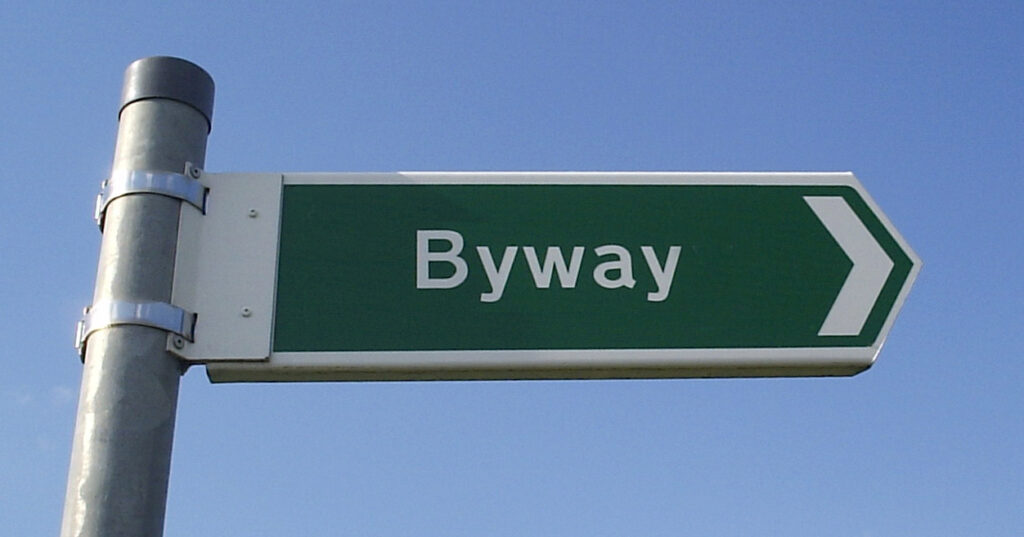 The Byway is an alternate path for buyers and sellers to reach each other independently that doesn’t rely on Big Tech platforms. This enables real, direct commercial relationships, in a small town/small business kind of way. It’s the brain-baby of our CTO, Hadrian Zbarcea, and is informed by his ample experience with the Apache Software Foundation, SWIFT, the FAA and other enterprises large and small.

In this model, the byway is the path along which messages signaling intent travel between individuals and companies (or anyone), each of which has a simple computer called an intentron, which sends and receives those messages, and also executes code for the owner’s purposes as a participant in the open marketplace the Internet was designed to support.

As computers (which can be physical or virtual), intentrons run apps that can come from any source in the free and open marketplace, and not just from app stores of controlling giants such as Apple and Google. These apps can run algorithms that belong to you, and can make useful sense of your own data. (For example, data about finances, health, fitness, property, purchase history, subscriptions, contacts, calendar entries—all those things that are currently silo’d or ignored by silo builders that want to trap you inside their proprietary systems.) The same apps also don’t need to be large. Early prototypes have less than 100 lines of code.

Messages called intentcasts can be sent from intentrons to markets on the pub-sub model, through the byway, which is asynchronous, similar to email in the online world and package or mail forwarding in the offline world. Subscribers on the sell side will be listening for signals from markets for anything. Name a topic, and there’s something to subscribe to. Intentcasts on the customers’ side are addressed to markets by topical name. Responsibilities along the way are handled by messaging and addressing authorities. Addresses themselves are URNs, or Uniform Resource Names.

These are some businesses that can thrive along the Intention Byway:

—in addition to sellers looking for better signals from the demand side of the market than surveillance-based guesswork can begin to equal.

We are not looking to boil an ocean here (though we do see our strategy as a blue one). The markets first energized by the promise of this model are local and vertical. We are currently planning to prototype and research the effects of both the Intentron and the Byway in Bloomington, Indiana, in cooperation with the Ostrom Workshop of Indiana University there (where Joyce and I are visiting scholars).

We also see the Byway as complementary to, rather than competitive with, developments with similar ambitions, such as SSI, DIDcomm, picos, and JLINC. Once we take off our browser blinders, a gigantic space for new e-commerce development appears. All of those, and many more, will have work to do in it.

*Specifically, a “data controller” is “a legal or natural person, an agency, a public authority, or any other body who, alone or when joined with others, determines the purposes of any personal data and the means of processing it.”

While this seems to say that any one of us can be a data controller, that was not what the authors of the GDPR had in mind. They only wanted to maximize the width of the category to include solo operators, rather than to include the individual from whom personal data is collected. (Read what follows from that last link to see what I mean.) Still, this is a loophole through which personal agency can move, because (says the GDPR) the “data subject” whose rights the GDPR protects, is a “natural person.”