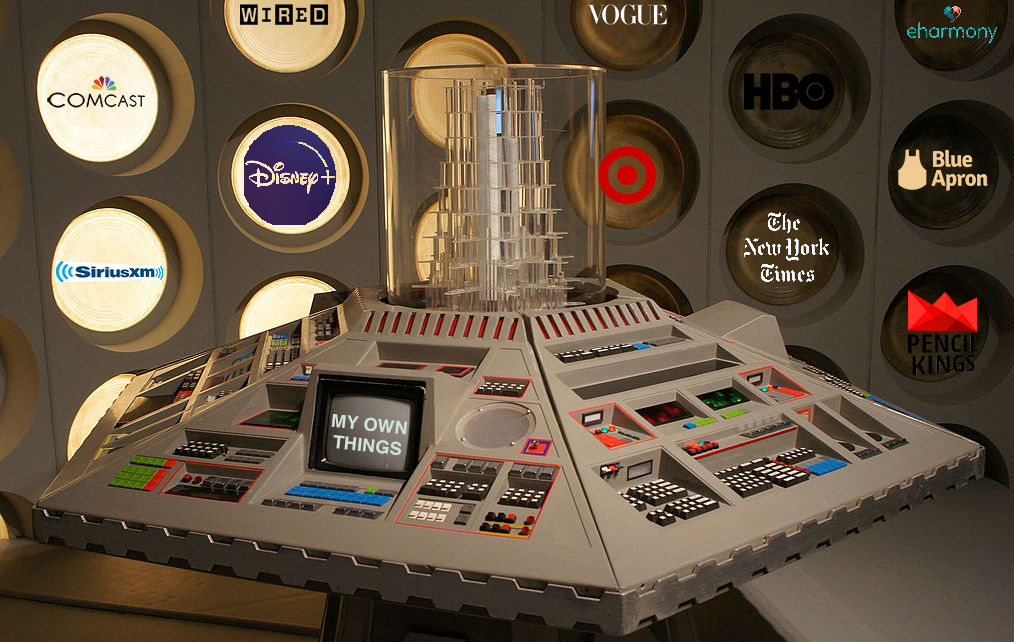 Count the number of companies you pay regularly for anything. Add up what you pay for all of them. Then think about the time you spend trying and failing to “manage” any of it—especially when most or all of the management tools are separately held by every outfit’s subscription system, all for their convenience rather than yours. And then think about how in most cases you also need to swim upstream against a tide of promotional BS and manipulation.

There is an industry on the corporate side of this, and won’t fix itself. That would be like asking AOL, Compuserve and Prodigy to fix the online service business in 1994. (For those not familiar with the reference, those companies were incompatible competing commercial forerunners of the Internet, which obsolesced all of them.)

There’s also not much help coming from the subscription management services we have on our side: Truebill, Bobby, Money Dashboard, Mint, Subscript Me, BillTracker Pro, Trim, Subby, Card Due, Sift, SubMan, and Subscript Me. Nor from the subscription management systems offered by  Paypal, Amazon, Apple or Google (e.g. with  Google Sheets and Google Doc templates). All of them are too narrow, too closed and exclusive, too exposed to the surveillance imperatives of corporate giants, and too vested in the status quo.

That status quo sucks (see here, or just look up subscription hell), and it’s way past time to unscrew it.) But how?

The better question is where?

The answer to that is on our side: the customer’s side.

That’s because subscriptions are in a class of problems that can only be solved from the customers’ side. They can’t be solved from the companies’ side because they’ll all do it differently. Also, most of them will want to hold you captive. Like Compuserve, AOL and Prodigy did with online services before the Internet solved the problem by obsolescing them.

We need to do the same here. Fortunately, by making subscribing (and changing subscriptions, and canceling them) as easy and normalized as possible, companies living on subscriptions will do a better job of making their goods competitive.

The short answer is with open standards, code and protocols. The longer answer is to start with a punch list of requirements, based on what we, as customers, need most. So, we should—

Some tech already exists for at least some of this, but we’ll leave that topic for another post. Meanwhile, give us suggestions in the comments below. Thanks!

The modified image above is a Doctor Who TARDIS console, photographed by Chris Sampson, offered under a Creative Commons Attribution-NonCommercial-ShareAlike 2.0 Generic (CC BY-NC-SA 2.0) license, published here, and obtained via Wikimedia Commons, here. We thank Chris for making it available.