Here’s what the Washington Post tells me when I go to one of its pieces (such as this one):

Here’s the problem: the Post says I’m blocking ads when I’m just protecting myself from tracking.

In fact I welcome ads. By that I mean real ads. Not messages that look like real ads, but are direct marketing messages aimed by tracking. Let’s call them fake ads.

Here’s one way to spot them:

When you see one of those in the corner of an ad, it means the ad is “interest based,” which is a euphemism for based on tracking you.

If you click on that icon, you get an explanation of what the ad is doing there (though no specifics about the tracking itself, or where trackers sniffed your digital exhaust across the Web), plus a way to “choose” what kind of ads you see or don’t. Here’s how the AdChoices site puts it: Here are just some of the many ways this is fulla shit:

Aagain, I have no trouble with real advertising, meaning the wheat kind, which isn’t based on tracking me. In fact I like it because it tends to ad value the publications I read, and I know it sponsors those publications, rather than using those publications just for chasing readers’ eyeballs to wherever they might be found, meaning the publisher-sponsoring value of a “relevant” ad based on tracking is less than zero. I also know real ads aren’t vectors for fraud and malware.

That’s why I run tracking protection, in this case with Privacy Badger, which tells me the Washington Post has 49 potential trackers trained to sniff my digital ass. I don’t want them there. I am also sure the Post’s subscribers and editorial staff don’t want them there either.

So how do we fix that?

You can track movement toward the answer in these reports:

Right now Customer Commons is working on NoStalking, which simply says this: 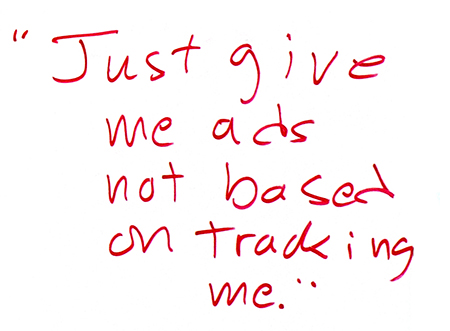 Obeying that request has three benefits:

So here’s a request to the Washington Post and to every other digial publisher out there: talk to us. Let’s fix this thing together. Sooner the better. Thanks.